KH measures an aquarium’s carbonate hardness, or the degree to which it is able to buffer against pH fluctuations. GH stands for general hardness, which measures the number of dissolved calcium and magnesium ions. GH is crucial for the growth of certain fish species.

Water hardness is important for aquariums because it affects how plants grow, fish reproduction, and other things that we will discuss below.

3-15 dGH is the ideal general hardness for planted aquariums, depending on stocking

Water general hardness, or GH, is the concentration of calcium and magnesium ions in a freshwater aquarium. GH is usually determined by your water source, but can be adjusted with additives.

General hardness is important for the muscle development, organ function and breeding of certain fish species. Shrimp species are especially sensitive to GH and do best in hard water.

Cichlids and livebearers such as platies, mollies, guppies and swordtails do best in hard water as well.

GH is less important for aquatic plant health; however, aquatic plants will benefit from calcium and magnesium. This means GH is useful but not necessary for plant growth.

4-12 dKH is ideal for most planted freshwater aquariums

Carbonate hardness, or KH, is the concentration of carbonate and bicarbonate ions in your water. It measures your water’s ability to buffer against pH swings.

It’s ideal for every freshwater aquarium to have some amount of carbonate hardness because pH crashes are dangerous for both fish and plants.

In fact, an aquarium will rarely benefit from having a low KH value.

How does KH protect against pH changes?

A higher KH level means an aquarium will be able to resist greater fluctuations in hydrogen and hydroxyl ions without causing pH swings. This is important for freshwater fish and plants.

What is the difference between KH and alkalinity?

KH only measures the carbonates and bicarbonates in an aquarium. These are the primary compounds that buffer against pH fluctuations.

However, there are other buffering compounds such as phosphates, silicates and borates that contributes to an aquarium’s overall buffering capacity, but to a lesser degree.

Alkalinity measures the buffering capacity of an aquarium’s carbonates, bicarbonate and other buffering compounds combined.

For all intents and purposes, the terms “KH,” “carbonate hardness” and “alkalinity” can generally be used interchangeably.

Most people use their tap water as the source for their freshwater aquariums.

The amount of carbonate hardness and general hardness will vary depending on your geographic location. Specifically, where your city chooses to source it’s water from and any additives your local water treatment plant adds.

For example, my tap water in Calgary is considered “very hard” according to the chart below from Labrador Source.

Seasonality causes the water hardness to fluctuate slightly throughout the year, as you can see from Calgary’s water report.

Also, our city’s to water treatment plants occasionally share water with each other depending on the river flows and water demand, which causes additional hardness fluctuations.

My hard local water means my aquarium water has a substantial number of bicarbonate and carbonate ions, which will maintain a stable pH level.

It also means my aquarium water has a high concentration of magnesium and calcium ions, which is great for keeping freshwater fish such as livebearers and African cichlids that prefer hard water.

So far my freshwater tanks have never experienced a pH crash.

How do GH and KH affect aquarium plant growth?

Neither GK or KH directly affect aquatic plant growth. Plants do not use a substantial amount of calcium, magnesium or bicarbonates as nutrition.

However, plants are especially sensitive to an aquarium water’s pH, which means that KH indirectly affects plant growth.

What’s the difference between dKH and KH?

KH is often measured using parts-per-million (ppm). This is the most accurate method for measuring water hardness.

dKH stands for degrees of carbonate hardness and refers to the number of drops required to complete a liquid water hardness test.

Is high KH bad for fish and plants?

A high KH is great for both fish and plants. It means the aquarium has a high resistance against pH swings. Plants and fish do best when the pH remains constant.

Very low KH values cause pH levels to fluctuate because there is nothing in the aquarium water that will absorb or release hydrogen ions.

One drawback is that increasing KH will also increase pH. So a high KH may make it more difficult for you to achieve low pH levels that are necesarry for certain fish species such as rasboras (5.8-7.0 pH) and loaches (6.5-7.5 pH).

Is high GH bad for fish and plants?

It’s beneficial for your planted freshwater aquarium to have some general hardness. A dGH between 3-6 will provide plenty of electrolytes and minerals for most fish to thrive.

Most freshwater fish and plants are less sensitive to GH, but there are a few exceptions.

Higher dGH is also important for the development of shells in snails and shrimp.

How do you measure aquarium KH and GH?

Both KH and GH are measured using a similar water parameter test. The most accurate method is using liquid test kits, such as API’s GH and KH test kit.

You can purchase a pack that contains a liquid test bottle for each of the GH and KH parameters.

With the KH test, you put 5ml of tank water in a glass tube. You then add one drop at a time of the test bottle solution. After adding each drop, you replace the cap and invert the tube a few times.

At first, the liquid will be a blue color. Eventually, an additional drop will cause the liquid to turn yellow. The number of drops that it took to turn the solution yellow is the degree of KH, or dKH.

You can use the chart below to convert dKH or dGH to their ppm equivalent KH and GH concentrations.

The GH test is conducted in the exact same manner. The only difference is that the color will change from red to green.

The dGH is the number of drops required to turn the solution green. 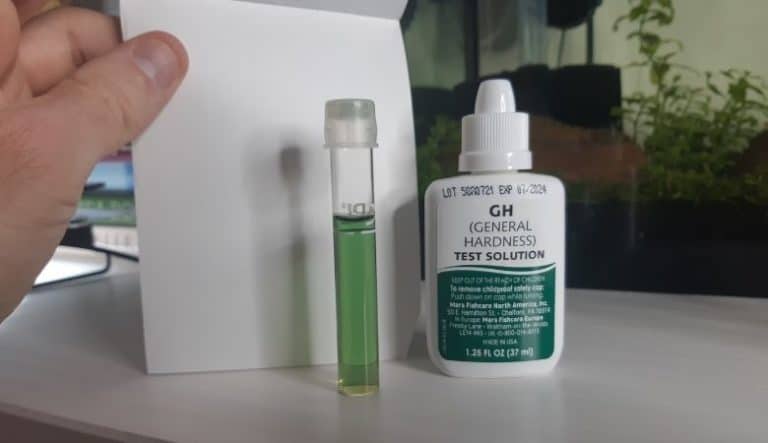 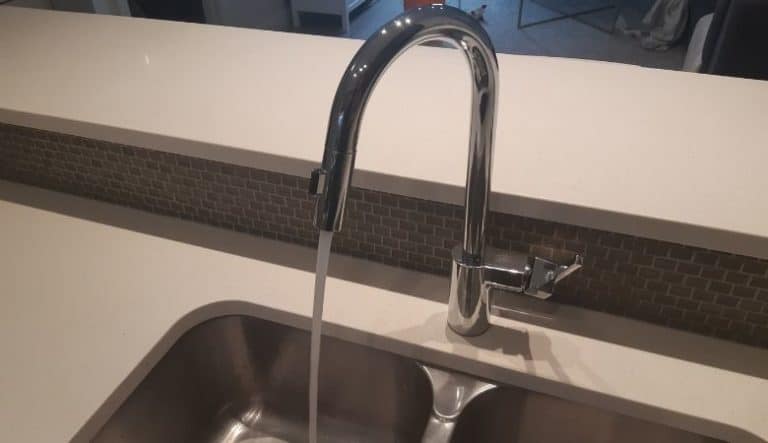 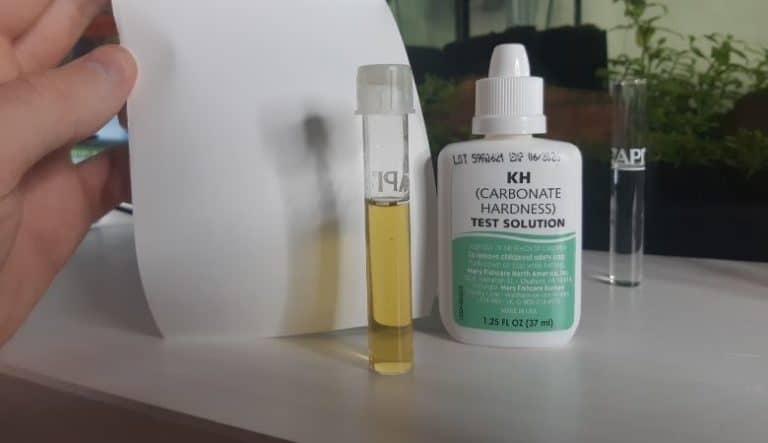 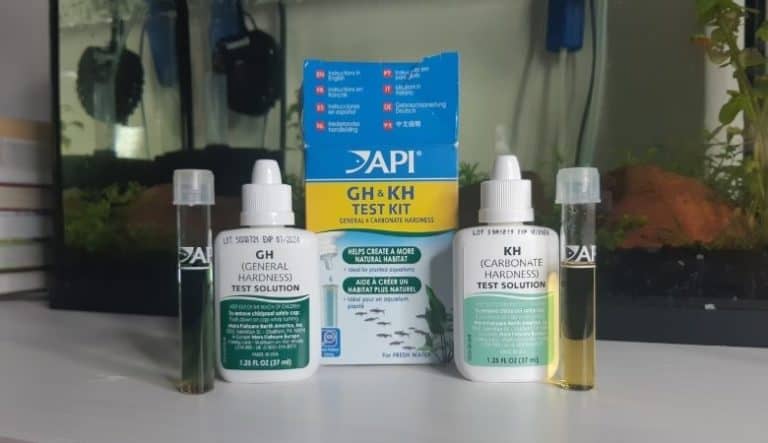 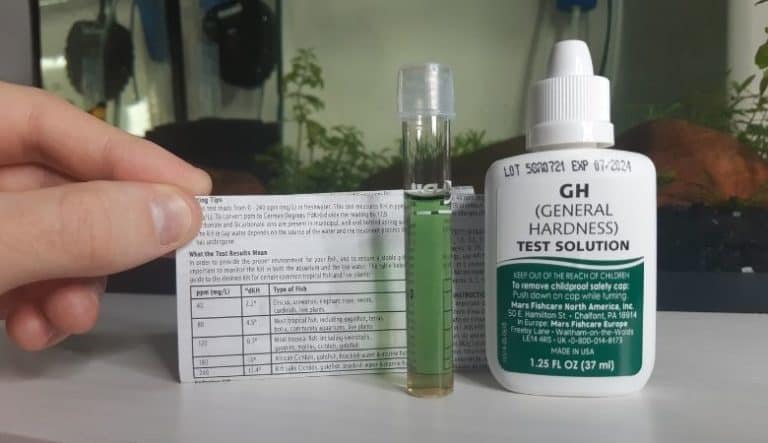 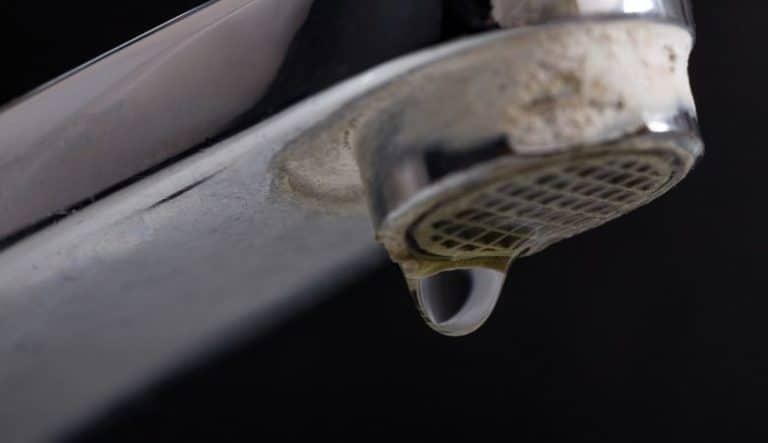