Low concentrations of aquarium salt will slow the growth of freshwater plants but will not cause them to die. In fact, most freshwater aquarium plants can tolerate concentrations as high as 2 tablespoons per gallon for short periods of time.

Many studies have proven that freshwater aquatic plants have more salt tolerance than most people realize. While it’s true that salt does not benefit plant growth, it’s also true that you can likely apply moderate salt treatments in planted tanks.

This article will share everything you need to know about planted tank salt treatments.

What will aquarium salt do to plants?

Aquarium salt causes plants to divert energy away from growth functions to help the plant maintain its osmotic gradient. If a plant is unable to maintain this osmotic gradient, its cells will begin dehydrating and will eventually die.

But here is what happens when salt concentration do reach a breaking point:

Plant cells die due to dehydration

This causes the osmotic gradient between the inside and outside of the cell to increase[4]. The plant then tries to achieve an equal salt concentration between these two areas by moving water outward.

Ultimately, this causes important plant cells to die due to dehydration.

Plant cell growth slows down because it spends excess energy

A high salt concentration also causes certain leaf cells to spend more energy trying to maintain equilibrium with the increasing salt concentration[4]. This is energy that would be spent on other biosynthetic processes.

In other words, plants are forced to divert energy that would be used to grow into dealing with the added salt. This prevents them from efficiently utilizing nutrients and growing as quickly as they would in a lower salt concentration.

How much aquarium salt can plants tolerate?

Studies have shown that freshwater aquatic plants grow more slowly and struggle to develop roots and leaves when the salinity is above 1,000 ppm[2]. This is equivalent to dissolving 1 gram of aquarium salt for every 1 liter of water. Or about 1/4 tablespoons of salt per gallon.

This means that a 10-gallon tank could have approximately 2.5 tablespoons of aquarium salt before most of the plants started growing more slowly. This is a higher concentration than many common salt treatment regimes.

This same study discovered that some plant species can tolerate as much as 4,000 ppm salinity, or four times as much. But this was not true for every species and is the upper limit.

For comparison, 30,000 ppm is the optimal salinity for plant growth in the ocean[3]. Freshwater is defined as having a salinity below 1,000 ppm.

Some freshwater plant species can tolerate several weeks of high salt concentrations. It is unclear if this is true for all common aquarium plant species but it certainly supports the option of using temporary aquarium salt treatments in planted tanks.

The study from the University of Adelaide in Australia exposed four freshwater plant species to salt concentrations up to 8,000 ppm for 3-6 weeks[1]. This salt concentration is equivalent to about 2 tablespoons of aquarium salt per gallon, which far exceeds even the most extreme salinity for any fish treatment.

These four plant species were then returned to freshwater below 1,000 ppm salinity and experienced a positive growth rate.

The point is that, while high salinity is not good for freshwater plants, a temporary exposure to it is not necessarily going to cause them to die.

How can I use salt treatment without damaging aquarium plants?

However, our personal experience and the available academic research on the topic do not cover every possible aquarium plant species.

We recommend experimenting on your own with low concentrations to begin with. And regularly monitor the health of your plants throughout the salt treatment. If you don’t notice any negative effects then consider increasing the concentration.

Better yet, consider applying your salt treatment to your fish in a separate quarantine tank.

What plants can tolerate aquarium salt?

Limnophila sessiliflora, hygrophila polysperma, cryptocoryne species, swarf sagittarius grass, triglochin procerum, myriophyllum simulans, cotula coronopifolia
and baumea arthrophylla are the species that we can confirm will tolerate salt treatment based on our personal experience and the academic papers we assessed.

We cannot confirm that other species will or will not do well in salt concentrations. But it seems likely based on our research that most freshwater plants should be able to tolerate low-moderate salt treatments for a couple weeks at a time.

How to remove aquarium salt from a planted tank

Water changes are the main method for removing aquarium salt from planted tanks. Salt unfortunately does not evaporate like some medications and other dissolved solids. Therefore, water changes will allow you to gradually lower you tank’s salinity over time.

If you have a high salt concentration then it might be worth performing slightly larger water changes to begin with so you can more quickly remove the salt from your aquarium. 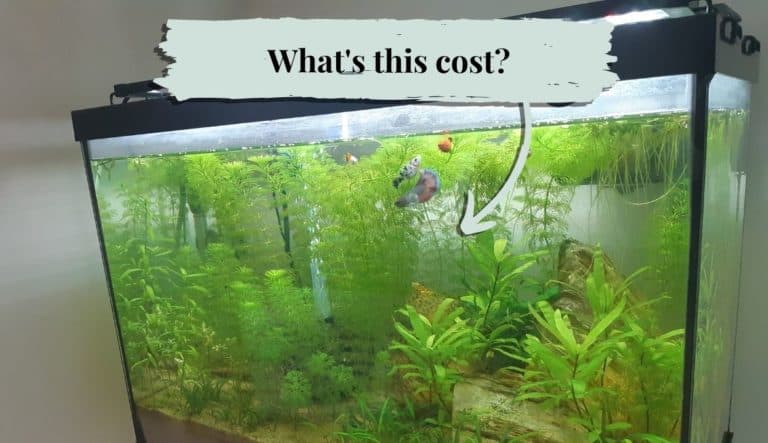